Net Promoter Score (NPS) has gained significant acceptance among business executives. Some are using it to measure improvements in their business operations – even to the extent of tying compensation to it. But what is NPS exactly?

Net Promoter Score is a metric used to measure the loyalty of a customer or an employee. It is based on one question, “How likely is it that you would recommend our (company / product / service) to a friend or a colleague?” This question is about more than just customer or employee satisfaction. The premise is that if someone is willing to recommend your company or your product or service, then they are willing to put their personal reputation on the line. This means they are not only satisfied; they are loyal.

The response to the question falls on a scale from 0 to 10, with 10 being the highest score. Respondents who select a 9 or 10 are considered Promoters. They are very likely to recommend your (company / product / service) and, according to the data, are also likely to stick with you for a while – even a long while. Those who respond to the NPS question with a 7 or 8 are called Passives. They are generally positive about your (company / product / service) but may not give it a rousing recommendation. Folks who respond with a score of 0 – 6 are Detractors. They are neutral to negative and are not likely to give a good recommendation, in fact, they might just bad mouth you vs. keeping their mouth shut.

The Net Promoter Score is calculated by taking the % Promoters and subtracting the % Detractors. Passives are left out of the formula altogether. The range of scores is -100 to +100.

To show you how it works, here’s an example: You sell 100 units of a new item to 100 different customers. After they use the product for one month, you ask each of them the NPS question, “How likely is it you would recommend our product to a friend or colleague?” The responses come in like this: 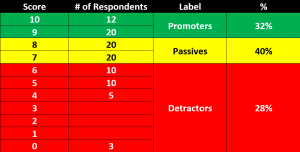 Frederick F. Reichheld from Bain & Company crafted the Net Promoter Score in the early 2000s. It was first introduced publicly in a 2003 edition of the Harvard Business Review (HBR). Since that time, it has been widely adopted with over 2/3 of Fortune 1000 companies using it. In the initial HBR article, there were several graphs that showed a strong correlation between NPS scores and 3-year growth (1999-2002) for several industries: airlines, internet service providers, and car rentals.

Not all companies publish their NPS scores, but I was able to find a 2018 blog that showed NPS scores for some well-known companies. The scores were as follows:

It is really hard to get a super high NPS score, which is why Tesla’s score is so amazing. Not only do you have to minimize your Detractors, but you must also move your Passives to Promoters.

Normally when the NPS question is asked, it is followed with a handful of other questions:

Only by asking these follow-up questions will you know what to improve. That is one of the critiques of the academics and market research experts who are somewhat critical of the NPS measure. They argue that NPS is no better at predicting business growth than other customer loyalty questions that measure overall satisfaction and the likelihood to purchase again. Others argue that the 11-point scale is not scientifically better than a 7-point scale. Still others suggest that the NPS question is less effective than a composite index and much more in-depth questioning is required to gain appropriate insights.

No matter what model you use, you should be doing something to understand how your customers (and employees) perceive you and your company / product / services. NPS is a great place to start. Even standard survey tools, like Survey Monkey, now have an NPS question built in. You do not have to build it, you merely have to select it and fill in the blank for company / product / service.

The key to using any metric is to define it well from the start and use it consistently. Once you start tweaking or changing it, you need to start over with a whole new baseline.

Find out how TopLine can help you learn your NPS through various marketing tools, and then can work with you to improve both your NPS and your business through our Six Sigma-backed process consulting. Contact us at info@toplineresults.com or (800) 880-1960 to find the best solution for your business. We’d be happy to help you start your NPS and process improvement journey!

Grow your business with the right sales and marketing tools.

Get your free assessment today